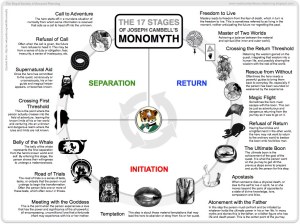 Joseph Campbell describes the journey hero’s take in stories, but I believe that we all can learn something from these stages. I hold this belief because we all should be the hero in our own lives and if we are the hero’s in our own lives we will eventually experience the following 17 stages of the Hero’s Journey:

Do you agree that these stages are relavent in real life and not just in fictional stories?